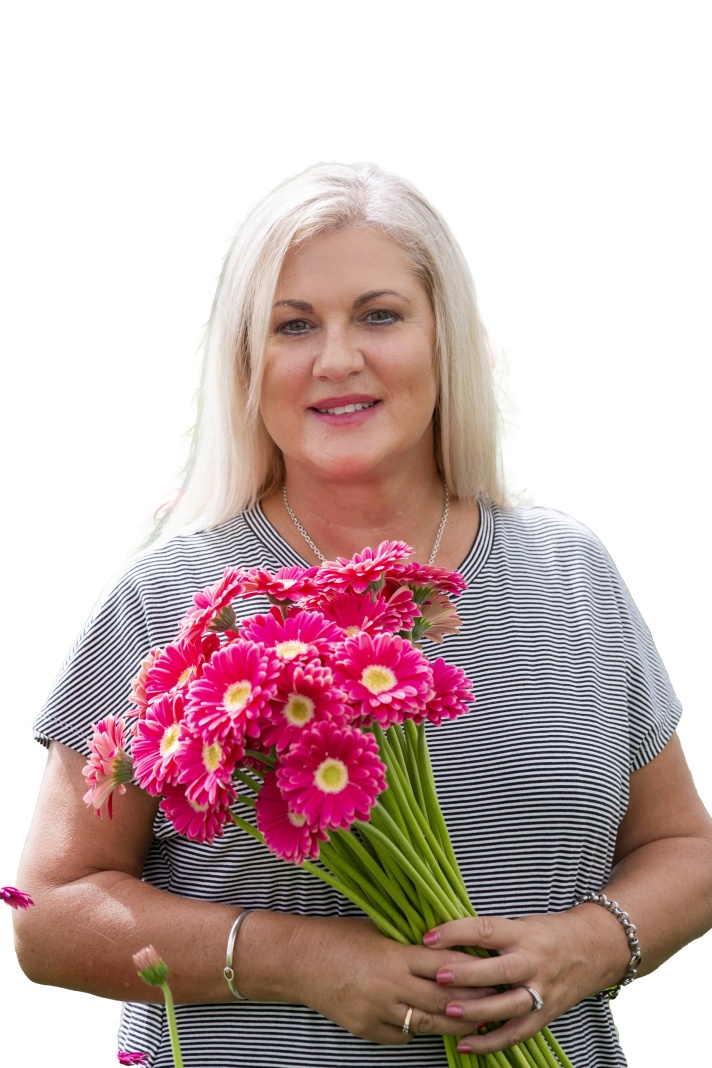 Do you live as well work at the Bokay property in Ramarama? Either way, do you grow flowers in your own backyard?

My son [Jacob] and father [Bernie] live at the property. I work there but live in Botany. I grow flowers at work and have a green lawn, green shrubs and low maintenance garden at home.

Neither of the above! As well as (obviously) being a play on the word ‘bouquet’, the business name is because its owners (my mum and dad) were ‘both Kays’.

It’s like you’re giving the gift of emotion – from love and appreciation to sympathy and, in some cases, even just as an apology. It’s the communication of the deepest feelings in the most elegant manner; receiving flowers is so beautiful as no words need to be spoken.

My mother [Pat] loved white lilies, however the last flowers I gave her – in hospital shortly before her passing – were pink roses and lisianthus to celebrate her 50th wedding anniversary. She loved them and I can still picture the bouquet today. You can’t go wrong with roses because they are so traditional and beautiful.

How did your family’s passion for flowers blossom?

I was born in Kaitaia and moved to Pakuranga when I was four, starting at Riverhills School aged five. But just a few months later, we moved to Papua New Guninea as my father was posted there with the NZ Police. After we returned to NZ, we moved to Drury then on to Ramarama and that is where the flower farm began, from a five-acre plot of rugged land.

I was 12 years old when Bokay flower Farms was born [in 1980]. My father always had a passion for nature. He wanted to farm animals, but the capital required to put dairying (for example) out of their reach. Being the amazing mother and wife Mum was, she followed my father in his dream and they grew a beautiful business together.

When did you join the business formally and what’s your role now?

In 1993. My role is ‘a bit of everything’! I’m in packhouse processing flowers, in the greenhouse and doing deliveries as often as I’m in the office.

Is your dad still involved? How hard has he found it to hand over the reins?

Losing my mother was devastating, for all of us, for my father in particular. Mum was the glue that stuck us together and things are just not the same since. She fought a long, courageous battle for six and half years, but she was still seen breezing into the packhouse to gather flowers, or just to say hello to the staff who all respected and loved her dearly.

I put everything into the business to help Dad after Mum passed, hoping he would start enjoying a bit more time to himself. However, handing the reins over has not been easy; Dad thinks things will crash in his absence, but I’m the kind of person who will not let any challenge beat me. Having said that, Dad recently bought a motor home, so we will see him less now, which is great because he definitely deserves some ‘Bernie time’.

Are your children keen to follow in your footsteps, down the garden path so to speak?

I have three children all in their twenties, including Cameron, who’s an accountant based in London, and Rebekah who works as a show jumping barn manager in Florida. My other son, Jacob, trained as a mechanic in the army before joining the business two years ago.

With Jacob’s involvement it will be easier for Dad to take a step back. There is a lot to learn, but Jacob is learning fast!

Bokay specialises in gerbera, anthurium, iris, solidago and gypsophila. What makes these blooms so popular?

Gerbera are colourful, joyful and a bright and happy addition to bouquets. Solidago is a filler used in bouquets, while gypsophila is a dainty, tiny white flower ideal for bridal bouquets, symbolising everlasting love and purity. Anthurium are great for brides too as they’re waxy long-lasting and heart shaped.

If you could be Minister of Agriculture, what would you do first (for horticulture) and why?

I’d make it a whole heap easier to bring bulbs and plants into the country. I’d reorganise MPI [Ministry for Primary Industries] and make it possible for our plant matter to be delivered in a timelier manner. I’m tired of all the red tape!

If you could invite any three people (living or dead) to dinner, who and why?

This sounds boring as my dinner parties would usually include more captivating people, but it would have to be Jacinda Ardern, Ashley Bloomfield and Christopher Luxon. I’d lock all the doors until the dinner party had finished; I have a lot of questions for them to answer!