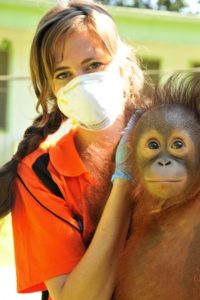 It can be a difficult task tracking some interview subjects down; when it comes to Sam Boston, it’s next to impossible! However, despite the logistical difficulties, JON RAWLINSON recently caught up with this intrepid, locally-raised young woman to chat about her work caring for wild animals in Borneo and the USA.

Samantha (Sam) Boston may have had a fair idea of the work that awaited her in the jungles of Borneo but nothing prepared her for the heartache she experienced. Since working with orang-utans at Sepilok Orangutan Rehabilitation Centre late last year, she has developed a deeper understanding of the plight of these magnificent creatures.

“While I was in Borneo their conservation status was changed from ‘Endangered’ to ‘Critically Endangered’. This is the final classification before they are deemed extinct in the wild,” she says.

“I learnt a lot about how people capture them as babies for pets, and of course how they are killed for the sake of palm plantations and other developments. I knew a lot of this already, but seeing it first-hand was devastating.”

Day-to-day, work involved feeding and plenty of cleaning to ensure sanitary conditions for the animals, many of which struggled with weakened immune systems. However, assisting with rehabilitation was crucial as many of the sanctuary’s inhabitants have been wrested from their native environment, the Bucklands Beach Veterinary Clinic nurse explains.

“Most of my time was spent ‘training’ the animals, taking them out into a copse of trees with a man-made jungle gym where each animal was monitored to ensure they were learning important skills such as climbing, swinging, nest-building and foraging. The sanctuary was amazing, but the animals we rescued came from pretty horrid conditions, and it was so sad to learn their stories.

“I was [primarily] caring for infants and youngsters under about eight years of age. I would definitely like to return in a few years to see how much the babies have grown and progressed.”

Sam also came to better understand the plight of Borneo’s people. She says visiting a third-world region provided a stark reminder of how privileged we Kiwis really are.

Despite widespread efforts to encourage westerners to avoid purchasing products containing palm oil – which has massively damaged the orangutan’s habitat – Sam says demand doesn’t seem to be reducing. She remains convinced that education is crucial to ensuring animals such as orangutans don’t face extinction.

“During my visit to Borneo it was clear that (in general) animal welfare was not a high priority for most people. Palm oil is a touchy subject because, for many, it’s vital to their livelihoods.

Developing alternative revenue streams is also essential to ensuring the region’s people, and its government, free themselves from relying on a profitable, although destructive, practice.

“I would really like to see a rise in eco-tourism. The more money we pay to support conservation efforts – by visiting sanctuaries such as the Sepilok Orangutan Rehabilitation Centre – the more locals will realise how valuable their wildlife is and better see the need for it to be protected.

“Money dictates so much in this world, so if we can add economic value to conservation, it will be better supported.” 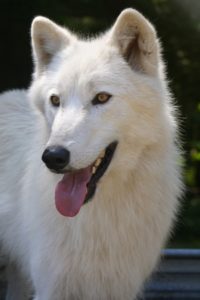 When she returns to the USA soon, Sam Boston will be looking forward to meeting the locals. ‘Meating’ the locals, on the other hand, is somewhat less appealing to her.
“My work will involve a lot of meat trimming and road kill collecting – which I don’t enjoy, but it’s for the good of the wolves,” she reveals. “I’ll also be providing companionship…
if they want it, that is!”

In July, Sam expects to rekindle relationships formed during two previous stints (in 2010 and 2014) working at Oregon’s White Wolf Sanctuary. She says she is looking forward to resuming old acquaintances and making new ones.

“Oregon is like my second home, and the arctic wolves are my fur family – second to my own pets. I’m expecting a warm welcome from the wolves and I can’t describe how excited I am to be seeing them again!”

While plenty of elbow grease will be required when cleaning or leading tour groups, Sam says providing companionship to these noble animals will be her priority.

“Because they will never be released into the wild, we spend as much time with them as they demand. They seem to think of us as their servants; I think that’s just wonderful!”

Sam hopes politics won’t hinder (or ‘trump’) her best intentions to continue caring for some of the world’s endangered creatures.

“There is some worry that, with the change in government, wildlife will lose some support in the States. I suppose we will have to see what the upcoming years bring. However, while wolf-culls still occur, in Oregon people rally for wildlife protection, which is fiercely defended as it should be worldwide.”

In addition to her travels to Borneo and Oregon, Sam has also worked with elephants in Thailand. Despite plans for her next trip to Kenya having “fizzed out”, she intends to continue working abroad in Africa, South America and Japan.

However, she admits that there is a somewhat ‘selfish’ side to her altruistic endeavours; there is most certainly a reward for volunteering abroad.

“When I return from these excursions I tend to feel more balanced and grounded. That helps me avoid taking the rat race too seriously. Spending time with wild animals, such as the wolves, definitely does this. There is something special about their presence; it’s very calming. It just puts life into perspective for me.”