Travelling during the height of a pandemic is probably one of the craziest things I’ve done. Why was I risking my life, flying into the eye of a pandemic, I asked myself? But then when your daughter tells you that she needs your support as she is going to have a baby, there is this inexplicable urge that makes you go to ridiculous lengths to welcome a new soul on this earthly plain. Some call it motherhood.

It’s one of those things you do when you take the leap of faith. And hope you fly!

After many sleepless nights, cancelled flights and lots of documentation, I took on the courageous decision to visit my daughter in Vancouver, Canada in the year Covid slammed its brakes on international travel. It meant that instead of a 14-hour direct Air New Zealand flight, it was a crazy 40-hour route.

Adding more drama was a call from our travel agent saying the last leg of the flight from Seattle to Vancouver was cancelled. This, just an hour prior to driving to the airport. Not the kind of news you want to hear when you have psyched yourself saying everything is going to be just fine.

Knowing that my sense of bravado would desert me if I postponed my flight, I nervously agreed to a change of destination, heading to Toronto instead of Vancouver. My daughter was on the phone, making last-minute changes to the hotel quarantine bookings even as I was midair.

With my mind in an absolute tizzy, I was trying to remind myself of something one of my colleagues had said about being a grandparent. Maria had described it as the ‘best experience in the world’.

Giving up the job I loved as news editor at the Times community newspaper, and heading on a sabbatical, didn’t come easy.

The irony of it all was that once in Vancouver, I spent all my days worrying about getting a spot in the MIQ lotto system. Not knowing when you can return home is a scary thought.

Eight months later I boarded an Air New Zealand flight to Auckland. There was a huge sense of relief and a certain sadness that so many were stranded overseas.
Covid has forced us to stop and reflect.

A call from the indomitable publisher of Times Media, Reay Neben saying the editor of EastLife magazine Helen Perry was retiring after 30 years with Times Media, and if I was up for the opportunity, made me realise that things happen for a reason. It’s serendipity.

They are big shoes to fill, knowing what a remarkable job Helen has done—but I’m up for the challenge with your support, of course.

And yes, did I tell you being a grandmother is indeed the best experience in the world? 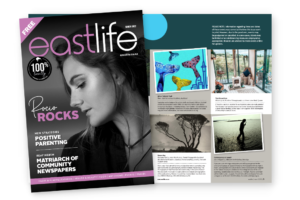