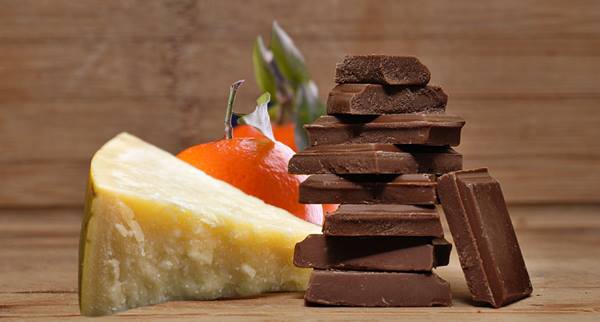 Prahran Market in Melbourne is one of editor HELEN PERRY’S ‘must visit’ places whenever
she is in Melbourne and after a recent visit there she thought she would share the market’s
in-house chocolatier Tad Lombardo’s favourite chocolate pairings.

Forget chocolates, strawberries and wine – some of these combinations may surprise but they’re definitely worth a try!

“I’d suggest eating them separately but directly after one another. Start with something sharp such as a wedge of parmesan or stilton then go for the chocolate. That’s how you’ll
get the most from the flavour.”

Perhaps, it’s an American thing and, apparently, it does work? Tad says: “This does work! Again, the sweetness of the chocolate and the saltiness of bacon create a unique flavour sensation. It’s really tasty so don’t knock it till you try it!”

Orange:
We’ve all heard of choc-orange or ‘jaffa’ flavoured treats but why does this pairing work so well?

“The choc-orange duo works perfectly when dark chocolate is involved,” Tad says. “It’s all because the bitterness of the dark chocolate neutralises the sweetness of the orange and the two flavours end up really complementing one another.”

Sage:
Okay, so you have no idea what he’s talking about here but Tad has no
misgivings.

“I know this sounds really awful but it actually works very well in a ganache. The aromatic earthiness of the sage seems to contrast really well with the sweetness and richness of dark chocolate. I don’t think you’ll find too many combos like this around!”

Peanut Butter:
This one’s a no-brainer. You can’t really go wrong when you combine chocolate with any sort of nut, right?

“Okay, again, this is very American and it trumps peanut butter and jelly, probably for no reason other than because I say so!”

EastLife says a big thanks to Tad for his sweet and savoury chocolate suggestions and hopes our readers will have fun with them.

Perhaps, some will even come up with pairings of their own.