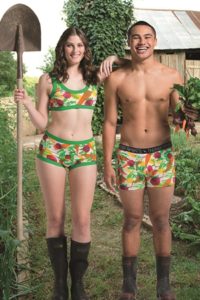 Thunderpants has launched an initiative while getting down to gr(ass) roots! Specialising in organic underwear and clothing, the Kiwi company has released a new range of undies featuring vegetables.

Until the end of July, the Soil and Health Association will receive two dollars from every pair sold and, for every

$500 raised, a new organic garden will be funded in a school, community or marae. Each garden will also benefit from seeds from Pakaraka Permaculture, Thunderpants creator, Josie Bidwill, explains.

“We love that we are able to help communities set up their own gardens, it aligns perfectly with our philosophy of slow growth and sustainable practice,” she says. “It’s really important for us to raise awareness of the value in small plot farming and community
gardening – giving power to people, keeping production local and communities thriving.”

And for those who think the idea of proudly sporting veggies on one’s underthings is ‘for the birds’, Thunderpants also has another recently-released range.

“As a country, we have a real connection with our native birds; everyone has their favourite, so we thought what better NZ icon to put on a pair of Thunderpants?” Ms Bidwell adds.

Produced from fair trade certified yarn, these fabulous Thunderpants are available via thunderpants.co.nz.